Bath:Hacked is asking the brightest and most creative people in our city to spend two days thinking, playing and hacking an untapped seam of BANES data.

It was with huge excitement that I headed along to Coworking Bath on Sunday morning for the judging of the first Bath Hacked event. 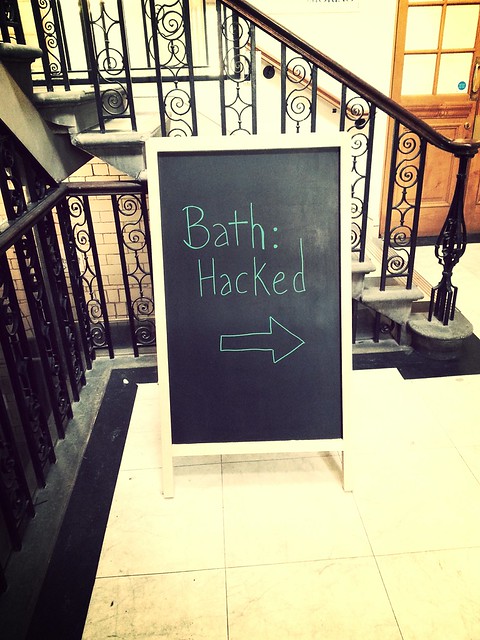 I arrived around 11AM, by which time the teams had been working for over 24 hours on their hacks. I spent 5 minutes or so with each of the teams in turn, looking at where they’d got to and getting a feel for where they were heading in the rest of the time they had.

There were no set judging criteria as such but I constructed a set of questions that I asked of each team I met to get a feel for:

Around 3PM, the teams gathered together and presented to one another, the judges and a big group of curious onlookers for 4 minutes. Then it was over to me, Doug Laughlen and Valerie West to try to decide which team should win in each of 4 categories:

Man, the judging was really, really difficult. The quality we saw from all the teams was simply outstanding. It wasn’t just the data wrangling that was impressive, it was the speed of delivery and the quality of the end products. We went well, well over our allotted 20 minutes and our deliberations could have gone on far longer before we were completely in unison.

Eventually, we did settle on prize winners but my fellow judges agreed every team we saw deserved accolades and recognition for their vision and productions. To that end, I thought I’d share the notes I took during the presentations (in order of appearance):

House or boat? by @oliward

Data blitz by @azazell0 and @_duncan_

So, I trust that gives you a sense of just how difficult the teams made it for the judges. It was a nice problem to have.

I hope that the platform Bath Hacked created for these few teams has opened the eyes of the many to the great possibilities that open data [and hack days] presents to Bath, the South West and beyond.  The noises made by the participants and organisers suggests that Bath Hacked will ride again. I sincerely hope it does.